I want to fix oven fries from fresh Idaho Russets but they always turn out with a blotchy surface, some parts of the potato are golden brown and the rest is pale. Sometimes they never brown at all. Any tips?

I learned a couple of tips years ago from Maggie Waldron who was the Test Kitchen Manager and a cook book author at Ketchum Communications in San Francisco. The first seemed so contrary to what I was always taught for restaurant quality fresh made French fries. I was taught to never refrigerate the raw potatoes as the starch turns to sugar below 40 degrees F. Well that science can be applied backwards.  For oven fries at home, go ahead and refrigerate the raw potatoes for a day or two. Leave the skin on or peel and cut into strips and place into water to keep from oxidizing, then drain and pat dry and place into a large metal or glass bowl. That time in the refrigerator will help the potatoes turn golden brown when baked on a pan, in a single layer when placed in the oven. The next trick… ignore all the oven fry recipes that call for 1 teaspoon or a tablespoon of oil. It’s not enough to coat the strips evenly. That’s what is causing the blotchy appearance. Add enough oil to the potatoes… Double what seems reasonable. Most will come off the potato strips when baking but initially will coat the fry and add crispness with a soft baked center. You could use olive oil, I’ve found kids prefer a little lighter oil taste, such as corn oil. Peanut oil is pretty expensive unless you have other recipes to fix with it and already like the taste. Kids generally don’t want to taste oil, they want potato flavor.

A couple other discoveries… those really thin metal pans cook up fast, and are hard to control the potato appearance. It’s pale for a long time and then you turn away and the potatoes are over done with a burnt flavor. A thicker pan distributes the heat more evenly. I put most casserole dishes on the middle rack for even circulation in the oven. Instead, try putting the pan of fries on the lower rack. Bake at a minimum of 350 degrees, and half way thru the process open the oven door, being careful to not get hot steam from the escaping water in the potatoes, take the pan out and turn the strips enough to cook the pale back side. I have a convection oven at home, so I crank it up to 400 degrees F and in 15-20 minutes I have a serving of fries that just needs a sprinkle of sea salt and maybe some grated Parmesan cheese before devouring. 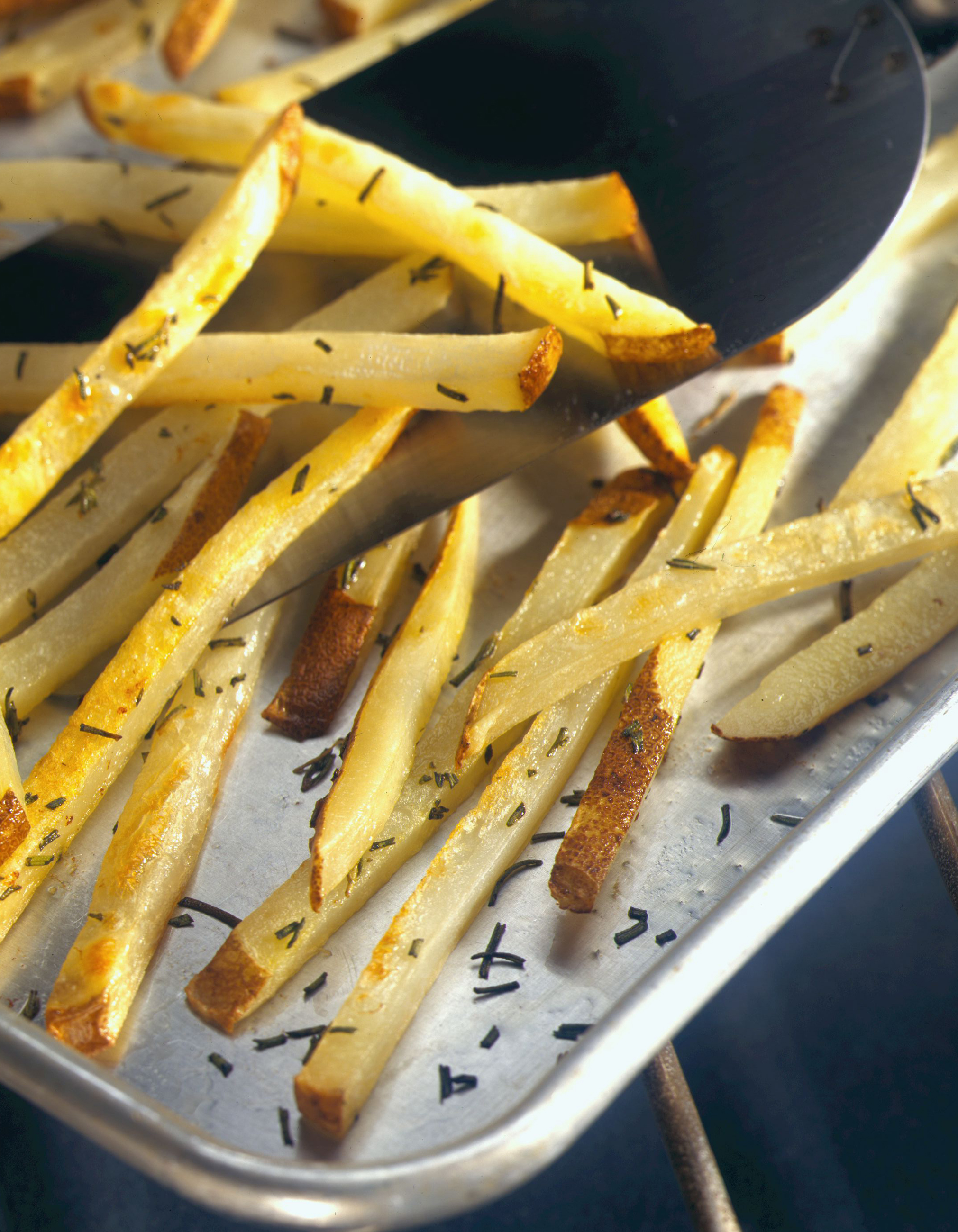